We can all help preserve the biodiversity

More than a million animal and plant species are threatened with extinction within decades according to the global assessment of nature report recently published by the Intergovernmental Science-Policy Platform on Biodiversity and Ecosystem Services (IPBES), an independent organisation made up from over 130 member states.

Deforestation, overfishing, intensive farming, pollution, climate change; the report concludes that humans are responsible for threatening the existence of 25% of the animals and plants, and that the current rate of extinction is tens to hundreds of times higher than the average over the past 10 million years. 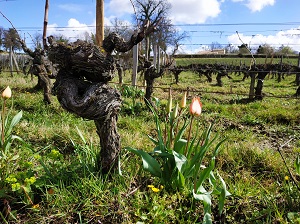 There is time however to stop the decline with a mix of local and global actions.  Nations, governments, and NGOs need to act together on a global scale, but we can all contribute on a local and personal level too, starting with the choices we make when purchasing items, for example by choosing producers that respect the environment and biodiversity.

At Gourmet Odyssey we only work with organically certified winemakers, a choice that we took when setting up the company 10 years ago.  We wanted to help support the people that are committed to preserving the local environment and biodiversity around their vineyards.

A notable example is our partner winery in Saint-Emilion, Château Coutet.  This winery has been in the same family for over 400 years.  They have never used any chemical products in their vineyards, and have consciously chosen to keep the trees, hedgerows, and gardens in place, as opposed to increasing the surface area of their vines.  This has resulted in the biodiversity being maintained naturally, and you can find a wide variety of plants, animals and insects, including an ancient rare tulip that was once found everywhere locally, but is now only to be found at Château Coutet.

Learn more about the selection criteria for Gourmet Odyssey partners.