One of the oldest family run wineries in Languedoc, the magnificent Château de Jonquières has been in the same family for over 900 years!

Located 40 km to the west of Montpellier in the south of France, the imposing Château de Jonquières is a classified historical building and marks your arrival in the village of the same name.  From the château you have magnificent views of the surrounding vineyards which rise up to the Terrasses du Larzac plateau and Mont Baudille.

Organically certified in 2013, the winery has 8 hectares of vines planted with Carignan, Cinsault, Syrah, Mourvèdre and Grenache Noir for the red and rosé wines, and Chenin and Grenache Blanc for the white wines.

Château de Jonquières has long received awards for their wines, winning a silver medal at the Universal Exposition in Paris in 1989 for which the Eiffel Tower was built!  Today, the winery is reputed as one of the best wineries of the Terrasses du Larzac appellation, receiving a star in the 2020 Revue du vin de France Meilleurs Vins de France (Best French Wines) wine guide, and being selected for the 2020 Guide Hachette, and the 2020 Betanne+Desseauve wine guides among others.  Their wines have also been praised by the international press, winning a bronze medal in the Decanter 2020 World Wine Awards, and the renowned British wine critic, Jancis Robinson, described the wine chosen for the Gourmet Odyssey Wine Experience as “Baked cherries and pomegranate on the nose with just a suggestion of something bruléed. Round and ruddy red and fabulously direct. The fruit has a startling purity, with just a bit of spice and grip. I find myself thinking, for the second time about a Jonquières wine, that this is the elegant side of Languedoc.”

Adopt a vine at the Château de Jonquières winery and get involved in making your own wine with the Gourmet Odyssey Wine Experience.

Languedoc Roussillon is a stunning region where the vines and Mediterranean Sea meet.  Stretching from the edge of Nîmes to the Spanish border, its vineyards make up the largest wine growing region in France.
The past few years have seen a real transformation of Languedoc Roussillon with the arrival of a new generation of winemakers, united in their aim of improving the quality of their wine whilst being more respectful to the land that provides their livelihood.  Today, Languedoc Roussillon has the largest surface area of organic vines in France.
At the moment, a reclassification of the Languedoc wines is in process, the best areas being designated as “Grand Cru”. 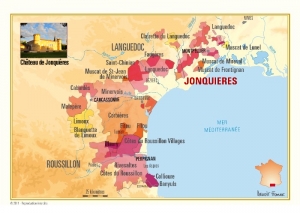 Montpellier – Méditerranée airport is the closet, around 45 minutes away by car (50 km). There are flights to Europe’s main cities by arilines such as Air France KLM, EasyJet, Luxair, and Vueling.

By Car
The distances and times below are estimated using GoogleMaps from the city centre to Château de Jonquières, Grand Rue, 34725 Jonquières.

To find out distances and times from other destinations, please click on this link