Château de la Bonnelière is located in a small hamlet near the medieval fortress town of Chinon, and has been in the Plouzeau family since 1846.  The giant cedar tree in the grounds outdates the family however, having being planted for the coronation of Louis XVI in 1774!

Today, Château de la Bonnelière has 19 hectares of vines, all of which are organically certified by Ecocert.  The vines are located in the vineyard next to the Château, and in various other plots around Chinon.  The initial fermentation and ageing of the white wines is conducted in the adjacent winery buildings, whilst the ageing of the red wines takes place in the stunning underground cellar, located in the centre of Chinon underneath the Chinon castle itself.  The cellar was conceived in the 13th century at the same time as the Château, the stone from which was used in the construction of the castle.  You can still see the shaft that was used to extract the stone blocks!

The cabernet franc and sauvignon blanc vines at Château de la Bonnelière are used to make two of the Loire valley’s most well known wines, AOC Chinon and AOC Tourraine.

A multitude of awards and reviews have been bestowed on the wines from Château de la Bonnelière over the years.  The 2022 Bettane+Desseauve guide highlighted Marc Plouzeau, the owner and winemaker at Château de la Bonnelière as being one of the pioneers of organic winemaking in Chinon, and awarded 91/100 for both his 2018 Chapelle red wine and his 2019 Silice white wine.

Château de la Bonnelière was selected by the Guide Hachette des Vins 2022, “a safe bet in the Chinon winemaking world,” for their 2019 La Roche red wine.  “A mineral touch develops into a rich fruity wine that marries well with the soft tannins and mellow oak.  A classic and refined Chinon wine.”

Adopt a vine at Château de la Bonnelière and get involved in making your own wine with the Gourmet Odyssey Wine Experience.

The Loire Valley, is one of the most visited regions of France, a UNESCO World Heritage site famous for its chateaux, gastronomy and wines.  The wine growing regions of the Loire valley stretch from Pouilly Fumé and Sancerre in the east, through appellations such as Cheverny, Vouvray, Chinon and Bourgueil in the centre, to the Anjou, Saumur and Muscadet wines in the west.

The difference in grape varieties and terroir throughout the Loire Valley make for a very varied wine region that produces a wide range of red, white, rosé, and sparkling wines. 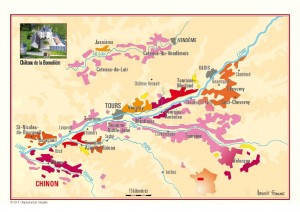 The closest airport is Tours, a one hour drive away, which is currently operating flights to Dublin and London with Ryanair.  More destinations, such as Geneva, Amsterdam, Nottingham, Leeds Bradford, Manchester, Barcelona, Madrid and Milan are served through Nantes airport, just over two hours away by car.  Alternatively the Paris Orly airport is 3 hours drive away, serving most European destinations.

By Car
The distances and times below are estimated using GoogleMaps from the city centre to Château de la Bonnelière, 1 rue des Basses Vignes, Launay, 37500 La Roche Clermault.   To find out distances and times from other destinations, please click on this link

There is parking at the winery.