Congratulations to our partner winemakers, Delphine & Ghislain d’Aboville, who have just been named one of the “Our Top Picks” by the prestigious Revue du Vin de France wine magazine. The latest edition of the magazine is dedicated to finding the best French wines from each region for the 2011 vintage.

Under the heading of “An Argentine flavour and thrilling wines”, the review states “Ghislain d’Aboville, his wife Delphine, and their five young children, have fulfilled their dream and settled in the hills above Caux. In partnership with Roberto de la Mota, the famous Argentine oenologist, they created the winery in 2008 by acquiring 9 hectares of vines and building the adjoining chai. Organically certified since 2011, the wines have progressed very fast, and now form a coherent and ambitious range. Here’s a new address which matters, with next-generation winemakers that bust a gut to make sure that Allegria prospers.”

But Allegria is not the only of our partners to be included.

Château de la Bonnelière received a “Success” rating for the wine chosen by Gourmet Odyssey.  According to the RVF, their Chinon Clos de la Bonnelière is “dense, full, with fine tannins and a natural expression. Organic wine.”

And Domaine Jean-Marc Brocard received a “Big Success” rating for their Chablis Grand Cru, Les Preuses. “With little interference in the vineyard or in the cellar, Julien Brocard has created a wine of high distinction. It’s vinification in ovoid vats is to be noted. Biodynamic wine.”

Congratulations to all our partners. We just need to wait a bit longer now until the 2011s are bottled! 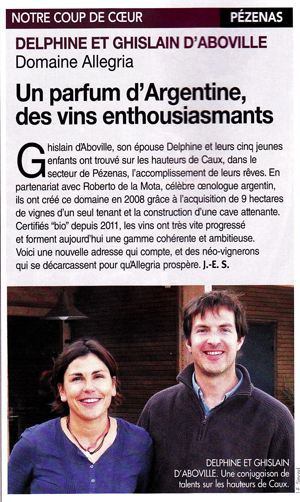