The vines in the Springtime

As our adopted parents for the 2016 vintage will have noticed during the Gourmet Odyssey Discovery Experience Days that are currently under way, the vines are slowly waking up from their winter rest. The winemakers have been busy finishing the last pruning, bending and tying the remaining vine branches to the training wires before the first buds peek through, so it’s now time to take a look at what happens during spring in the vineyard.

Once the harvest has finished and the first cold winter weather sets in, the sap descends into the roots and foot of the vine stock. The vines are further protected from the frosts by heaping earth around the trunks, and last year’s branches are cut away so that the plant can concentrate its energy on producing the growth necessary for the coming year’s harvest. Even if this winter was uncharacteristically mild, the vines still passed through this hibernation mode, the length of which varied depending on the region of France.

With the warming of the weather towards the end of March, the sap starts to climb back up the plant into the branches. Sometimes you can even see tears of sap form and drop from the where the branches have been cut. 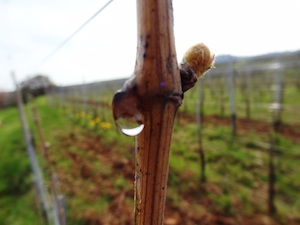 The tears herald the arrival of the first buds breaking through on the vines. This is a much awaited moment in the vineyard, but one that causes lots of worry for the winemakers. At this stage the vines are very vulnerable, and next year’s harvest is at the peril of frosts or wild animals that love to feast on the fresh, succulent buds. It’s time to watch and protect the vines as best as possible. 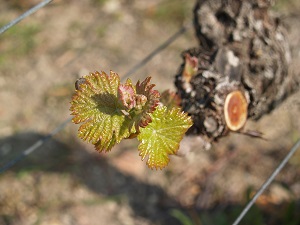 When it comes to buds, there are various different types. There are those that we leave on the main branches at the time of pruning, which are also sometimes referred to as eyes, and from these buds will grow the first shoots.

On these shoots, another type of bud, terminal buds, will form at the end of the new branch. These buds are responsible for the growth of the branch, and so once the vine has sufficiently grown and the winemaker wants the plant to turn its attention to ripening the grapes, the ends of the branches are cut off, and the growth is then stopped. 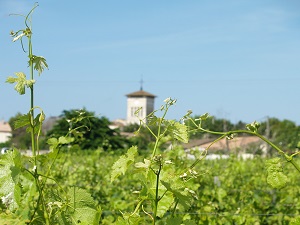 Then there are auxiliary buds, found under the leaf axils. These are latent, and won’t develop this year, but will burst next year. Vines have a two year vegetative cycle, and it is these buds that we leave when we prune for the following year’s campaign.

The growth of the vines

Once the bud burst period has finished, the vines enter a growth phase for the rest of spring and summer until the temperatures start to fall again in September or October.

Leaves also develop on the branches and they have a double role. They enable photosynthesis to take place, and they help the vine to regulate its temperature through releasing water. The leaves from each vine varietal haven their own distinct morphology, making it much easier to name a particular type of vine in springtime than in the depths of winter! 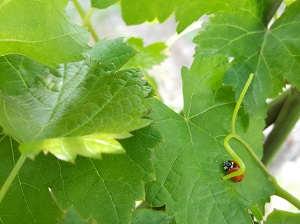 At the same time as the growth of the leaves, tendrils also develop to help the vine support itself. The green and supple tendrils reach out and wrap themselves around whatever they can find, the training wires being ideal. As time goes by, the green tendrils turn brown and into wood, which is why it’s so much harder to pull the branches away at pruning time.

Spring work in the vineyard 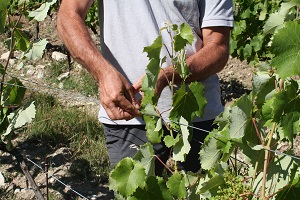 From Spring onwards, a large part of the winemakers work in the vineyard is to control and manage the growth of the vines in such a way as to help the grapes reach optimal maturity at harvest time. De-budding and removing any unwanted shoots, and training the vines are the first tasks to be undertaken as the growth gets under way. Read our post on the spring work in the vineyard for more information.